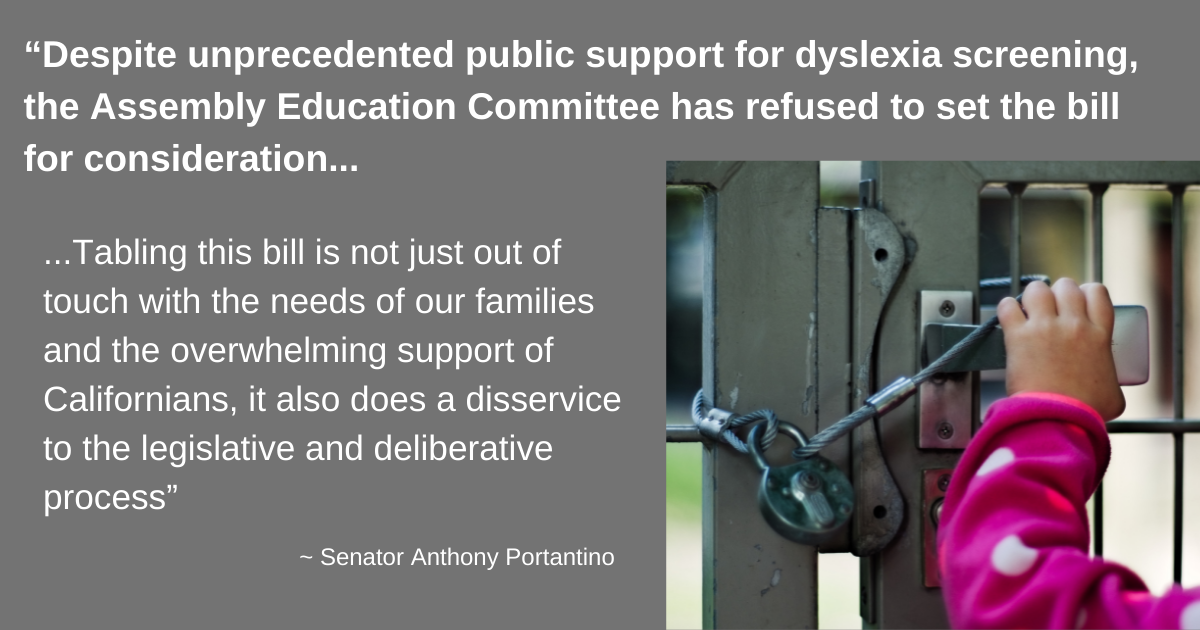 Senator Portantino issued the following press release related to the need for  SB 237.

Sacramento, California – Senator Anthony J. Portantino (D – La Cañada Flintridge) is pleased to announce the results of a new statewide poll, which found that an overwhelming majority of Californians support universal early screening for risk of dyslexia. This policy is proposed in SB 237, authored by the Senator.

“Early universal screening for risk of dyslexia will improve the lives of countless children and help them thrive in school and succeed throughout their careers,” stated Senator Portantino. “With nearly unanimous support statewide for universal screening, it’s critical that we support policies that help us achieve this goal.”

A recent statewide poll found that 87% of California voters are in favor of universal early screening in grades K-2 for risk of dyslexia. The survey had a large sample size of over 4,200 voters statewide and the findings were consistent for all categories of voters across the state.

By taking less than fifteen minutes to screen a student early in the school year, schools can help families and teachers achieve the best learning and life outcomes for all students, close academic achievement gaps, avoid costly interventions later in students’ academic careers, and help end the school-to-prison pipeline.

SB 237 will require the State Board of Education, beginning in the 2022-23 school year, to approve screening instruments to be used annually by schools in order to identify students who are at risk for dyslexia. It is estimated that approximately 10% to 15% of Americans have symptoms of dyslexia, making it the most common form of learning disability. Due to inadequate screening, only about 5% of people with dyslexia are aware that they have it. The proportion of people with dyslexia is believed to be much higher amongst incarcerated individuals. In California, the Department of Corrections and Rehabilitation reported that in 2006 more than half of adult inmates were functionally illiterate.

“As California moves forward to reopen schools, we must do better for all our kids. Universal screening will ensure students lacking resources and advocacy on their behalf are appropriately identified as being at risk of dyslexia and receive the appropriate instruction and support to reach their full social emotional and academic potential,” stated Bill Lucia, President of EdVoice, a co-sponsor of SB 237 along with Decoding Dyslexia California.

SB 237 is personal for Senator Portantino, as he struggled with dyslexia, ADHD, and cross dominance during his own time in school and continues to face these challenges every day.

“Despite unprecedented public support for dyslexia screening, the Assembly Education Committee has refused to set the bill for consideration. Clearly, California should be doing more to better serve our students in need. Tabling this bill is not just out of touch with the needs of our families and the overwhelming support of Californians, it also does a disservice to the legislative and deliberative process,” added Portantino.

Survey results can be found by visiting https://sd25.senate.ca.gov/applecart-dyslexia-results.